Combine the wonderful flavors and smells of fall with this delicious homemade cinnamon apple bread. It’s rich with apples, cinnamon and pecans!

We recently went apple picking and I am still trying to figure out ways to use up all of the apples we picked! So far my kiddos and I have made Apple Turnovers , Mini Apple Pies, for The Crust Lover, All-American Apple Pie. ..and now an Apple Bread! It’s safe to say that I ❤️baked goods! haha

I found this recipe on Wishes & Dishes but changed it up a little bit by adding in the pecans. The pecans added the best crunch on top that took this cinnamon apple bread to the next level!

The chunks of apple cooked down while baking and became soft, the top was nice and crunchy with the pecans and the inside was delicious moist!

My entire family loved this bread, especially my husband, who typically is not a bread fan! 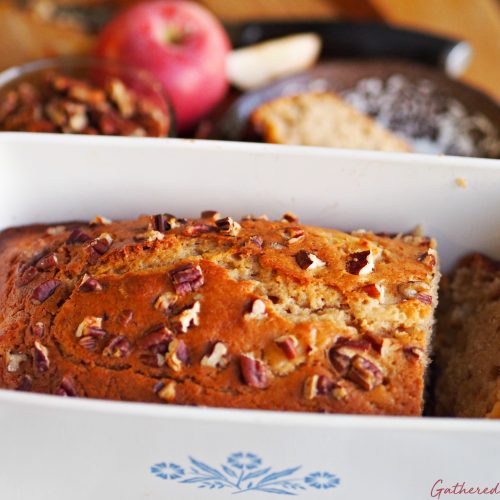 Tried this recipe?Let us know how it was!

I’m so glad I gave this recipe a try! It is definitely a make again…and a perfect gift to give!