This past weekend I had the privilege to fly to Chicago for Shaklee’s Regional Conference.

One of our speakers was Kim Vandenberg, Olympic Bronze Medalist in the 2008 Games in Swimming. Listening to her brought me back to all of my years of competitive running, 10 to be exact!I ran Cross County and long distance Track. My workouts were in line with marathon training. I ran so many times each day!

The wear and tear on your body really takes a toll season after season. I raced 3 seasons each year. The only season off was summer, but our summers involved very vigorous training. So basically it was 4 seasons out of the year.

I really had never been injured until College. It was in College where my running career finally came to an end. It was very bittersweet. One one hand I was kind of relieved (in the sense I could be a “normal person” and not have to work out for hours each day), but on the other I was devastated. Running had been something I had started in middle school. It was definitely an adjustment.

You know the saying “I wish I knew then what I know now”? Well I wish I had known about Shaklee all those years ago and that I would have known the importance of nutrition. I’ll admit, I was a very picky eater in College. I hated the dorm food (I have issues with food being made in large quantities). So I would basically eat a salad for lunch and dinner followed by an ice cream cone….and a million other desserts in between. I barely drank enough water, especially for someone running a million miles a week. I didn’t drink pop or really anything else. I’m a water person, but still, was definitely lacking big time.

I had reallllly low iron. It was so low that I had to be on an iron supplement and be tested every so often. I’ll be honest, the liquid iron was so disgusting I barely ever took it. All of that added to not sleeping enough, being stressed with school, and working almost 20 hours a week just made one big fun combination. Funny now, admitting everything I did wrong that I made it out alive! 🙂

Anyway, like I had said, I wish I would have known about Shaklee. It would have helped sooo much! But for now, I can help others who are current athletes and work on developing my own healthy little athletes.

Shaklee has an amazing Sports Nutrition program. I have summed it up in this image below (you all know by now I’m a very visual person so graphics are my friend!) 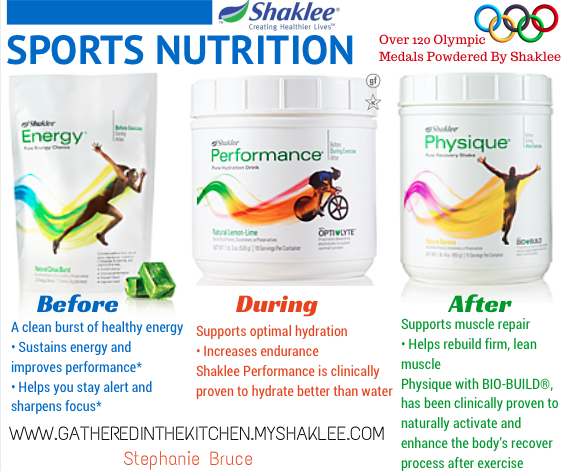 Kim Vandenberg is a Shaklee user and acknowledges that Shaklee has amazing products!! To add to Shaklee’s awesomeness, they have over 120 Olympic Medals earned by athletes that used Shaklee!!

I love the Energy Chews for when I’m driving for long periods of time instead of drinking coffee. Coffee on road trips 1. makes my stomach kill 2. makes me have to go to the bathroom (pit stop = unhappy hubby). Speaking of my hubby, he also loves the Energy Chews for at work, he even hands them out to his coworkers who complain of being tired or having no energy.

My kids love the Performance. It’s a healthy sports drink that tastes so good!! We pack it for their sporting events. We also use it in place of Pedialyte because it has no artificial anything in it!

Physique – I mean what else can I say? Rebuilds firm, lean muscle!! How perfect is that? I know when I’m working out, I want to lose my fat but not my muscle!

What do you use for working out? Do you follow a nutrition plan? Interested in learning more about Shaklee’s products? You can check them out HERE!